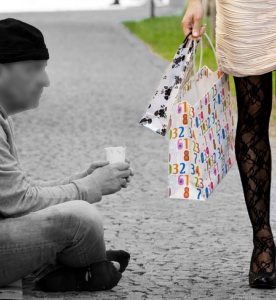 Two big figures in Australian finance are at odds over inequality.

On Monday, Treasurer Scott Morrison said inequality was being reduced.

“What I don't accept … that this idea, that people and inequality and incomes have been going in the wrong direction, that's not borne out by the facts,” he told reporters.

Days later, Dr Lowe spoke at an event supporting the Anika Foundation, and said the gap between rich and poor was widening.

He also made the distinction between “wealth” and “income” inequality.

“Wealth inequality has become more pronounced particularly in the last five or six years because there's been big gains in asset prices,” he said.

“So the people who own assets, which tend to be wealthy people, have seen their wealth go up.”

But Dr Lowe said income inequality was rising too, just not as rapidly as wealth inequality.

“Income inequality has drifted up a little bit but not very much,” he said.

Dr Lowe focused on record low wages growth as a key concern, with workers today experiencing significantly lower rises in their pay packets than during the last recession, nearly 30 years ago.

While productivity growth has slowed, Dr Lowe said many workers were still being shafted.

“The slowing in earnings growth has been more pronounced than that in productivity. The result has been a decline in labour's share of national income,” he said.

“The governor's comments on wealth inequality were related to more recent rises in asset prices.

“This is of course strongly impacted by increases in house prices in Sydney and Melbourne.”

“Anyone trying to buy a house or scrape by in a low-paying job knows how hard it can be.

“Labor is looking to tackle the problem by addressing the unfair elements of our tax system and ensure that schools are correctly funded.

“I'm optimistic we can make a difference. Let's just hope Scott Morrison actually listens now and finally acknowledges there is a problem.”