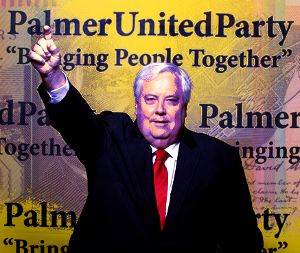 The Palmer United Party has matured from a political curiosity into a proper powerhouse, picking up new members and continuing to annoy the established factions.

No-one would have guessed that the party seemingly started at the whim of a billionaire would have gained the momentum it has, as the Palmer United Party picks up a number of disaffected and defecting members of major parties.

There are claims that the PUP has been buying new members off old parties.

The defections add to the powerbase of the mining magnate’s political foray, which Mr Palmer says shows the broad dissatisfaction with the existing parties.

“Very significant that the former president and the existing deputy treasurer of the Liberal Country leaves,” he said.

“It indicates how bad the organisation is that it doesn't really care about all Territorians.”

Back in Queensland, the head of Katter’s Australian Party QLD branch says KAP and PUP should merge for mutual success.

KAP QLD leader Ray Hopper says the parties should join together and watch as the state's LNP Government continues to “self-destruct”.

“This has got to happen for the sake of Queensland - it's as simple as that,” Hopper said.

“The timing is perfect - the Newman Government is self-destructing and there is definitely room for a third political force in Queensland,” he added.

The party’s founder, Bob Katter, says nothing formal has been proposed.

Mr Palmer has previously posited that the two parties are too dissimilar.

Meanwhile the PUP’s growing membership may be questioned in court.

Gold Coast LNP State MP Michael Hart has made claims that the Palmer party offered to pay him to come over to their side.

“What was said was ‘what can we offer you to come across to the Palmer party’, which I took that as an inducement and immediately reported that to the police,” Mr Hart said of an alleged phone conversation with a member of PUP.

Police are understood to have found no evidence of such an inducement.

“We said; ‘we are not for sale’. As a result, he has gone on a rampage around Australia, trying to buy other people and buy people's votes,” Mr Newman said.

“I ask, what inducements were offered to these three MPs? What cash? What jobs? What financial support for elections? What offers were made for them to jump ship?”

Mr Palmer says Mr Newman is attacking his integrity, and says he will sue the state premier.

“This is a political attack by an angry man. There'll be no settlement, no negotiations, the matter will go to trial,” Palmer said

“Mr Newman will have the opportunity to present all the evidence he has of such matters before the courts - the Supreme Court of Queensland,” he said.