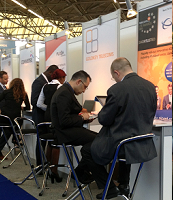 The people in charge of a new plan to deliver the next generation of Australia’s internet infrastructure have got some of the advice they need at a summit in Stockholm.

Representatives from the National Broadband Network company have attended the Broadband World Forum in Amsterdam, hearing from international experts on the future of internet technology and access.

NBN Co will be looking at tips for its new plan to deliver a nationwide system that is slower and cheaper than previously planned.

NBN Co's chief technology officer Gary McLaren says; “with the new incoming government we have a little bit more flexibility in terms of what we can do for rolling out the NBN.

“As we go through the strategic review we're going to be looking at a number of different technologies.”

An address from representatives of Google said people are fed up with the current standard of internet speeds, and that internet-use is being held back by frustration and boredom.

“We believe that faster internet speeds will lead to what we believe is the next chapter of the internet,” Google's Kevin Lo said.

“Studies show that 80 per cent of people do walk away when they see loading bars and similarly 11 per cent of potential customers will walk away from a website if it loads just one second too slow.

“We see this at Google as well - we once ran an experiment where we slowed down the search results by just a blink of the eye and it resulted in a significant reduction in the number of search results.”

As a continent, Europe has the fastest average Internet speeds in the world, with an average peak connection speed of 23 megabits per second outstripping the global average of 15.9 Mbps.

Even so, commissioner for the digital agenda in Europe Neelie Kroes, says the continent is falling behind the enhanced possibilities of high-speed internet – and something must be done.

“High speed networks are the backbone of the digital market but compared to international competitors, Europe lags behind in providing those networks - fixed and wireless,” Kroes said.

“That's not sustainable; we can no longer to afford to ignore this growth.”

Google's Kevin Lo says needs are stimulated by the presence of improved access, not vice-versa.

“We've really been surprised and impressed [at the effect] fibre connectivity and faster internet can really have in a community,” Lo said.