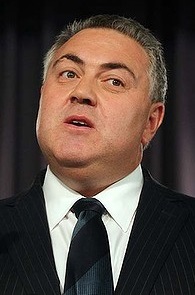 Treasurer Joe Hockey was responding to fears over lost potential resource profits in his recent move to raise the debt ceiling and boost the RBA, reports say.

The high Australian dollar sparked some concern that mining projects might be lost to cheaper services overseas, adding pressure to the Government’s budgetary plans. Related concerns of a US-led economic downturn all played-in to the Treasurer’s actions this week.

With downgrades forecast for major construction firms and the shelving of hundreds of billions of dollars worth of mining projects in recent years, it can be presumed that the golden times for mining and construction investment have been stymied.

Tony Abbott said he sought to combat the slowing of the sector in the lead-up to the election. Since being voted in, about $150 billion worth of resources projects have already been placed on hiatus.

The Federal Government is clear in its methods to “re-boot” the resource sector and thus the greater economy, dumping the fiscal sacrifice they see as inherent in mining and carbon taxes.

Treasurer Joe Hockey says: “Getting rid of things like these are all difficult areas to get right, but doing so is key to creating an environment where business is confident”, also saying that a business-friendly environment was “much more important than small changes in interest rates.”