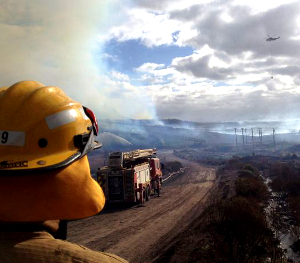 Victoria’s Country Fire Authority (CFA) is attempting to recover the cost of putting out the 2014 Hazelwood coal mine fire.

A Supreme Court trial beginning next year will see the CFA seek $18.1 million plus interest from the Hazelwood Power Corporation and four related companies.

It comes after a fire that started on February 9 2014, when a bushfire entered the Latrobe Valley coal mine and burnt underground for 45 days. Resources from 94 brigades were used to fight the fires.

The CFA says it wants Hazelwood's owners to pay for its services under the Country Fire Authority Regulations Act 2004.

The Act says that a person requiring the CFA's services may be charged “in respect of an attendance of a brigade in special circumstances requiring the protection of life or property in case of fire”.

But Hazelwood Power Station and its co-defendants argue it has no liability to pay a fee, saying the CFA was carrying out its duty. They will also point out that they pay the annual Fire Services Levy for land in Victoria to help fund Victoria's firefighting services.

The CFA sought payment several times in 2015, but all its legal requests were rejected.

Justice Gregory Garde said the complexity of the case requires a trial.

“It is apparent to me that the contested issues of fact and law are more numerous and important than may have initially appeared,” Justice Garde said.

“This is not surprising, as terms like special circumstances and extraordinary circumstances inevitably present difficulties in application wherever they are found in legislation.”

He said that factual disputes between the two parties were “inextricably interwoven” with the legal issues of the case.

“A fundamental issue is the nature of the statutory scheme, and whether the cost of the fire response by the CFA should be borne by funds provided through the fire services property levy, or apply user-pays basis,” Justice Garde said.