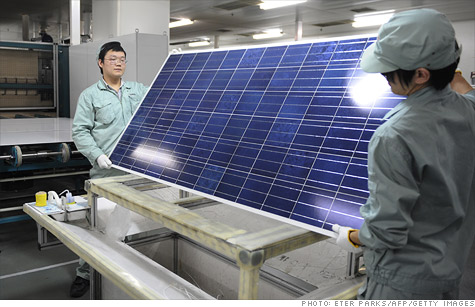 A new report says there is evidence of forced labour and slavery in the production of solar panels and wind turbines.

A report by the Clean Energy Council has called for more local renewable energy production and manufacturing and a “certificate of origin” scheme to counter concerns about slave labour in mining and manufacturing in China, Africa and South America.

Australia may soon generate the vast majority of its electricity from solar, wind, hydro and batteries, but it must play an active role in addressing slavery in renewable energy industries, the report says.

“We’re at a moment in time when renewable energy supply chains are going to be scaling up significantly,” says Dr Nick Aberle, the Clean Energy Council’s energy generation and storage policy director.

“That means now is a critical opportunity to shape the future direction of those supply chains.”

Among its examples of forced labour and slavery in supply chains for solar and wind energy and battery storage, the report notes;

“In NSW, government entities and local councils are legally required to take reasonable steps not to procure products of modern slavery,” he said.

“This may include some solar panels, lithium-ion batteries, wind turbines and renewable energy.

“This report is an important and welcome acknowledgment by industry of this problem and a first step towards addressing it. But we need to see industry, government, the financial sector and civil society working together to provide access to competitively costed, slavery-free renewable energy.

“If we don’t, modern slavery risks significantly complicating the just transition to a decarbonised economy.”