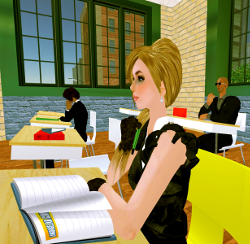 A pilot program is using technology to bridge education barriers worldwide, by conducting courses through avatars in an entirely virtual world.

A project by some research in the US has demonstrated the potential of using a virtual computer environment for distance education, providing a new avenue for an international audience that often has limited access to conventional teaching and training.

The recent program offered a course on healthcare - specifically reproductive health and population control - to hundreds of participants in more than forty, mainly developing, countries.

Researchers have conducted an in-depth study on the course and its outcomes, finding that for many, living through a virtual character in the engaging and immersive environment is a truly effective way to learn.

The course was offered in a custom environment created within the ‘Second Life’ world, which is a long-running virtual social environment. It allowed elements such as visual displays and Powerpoint-style presentations to be rendered within the world, as well as three-dimensional models and other virtual aids.

After running participants in the pilot program through setup and troubleshooting sessions to learn the software, create their avatars and resolve sound issues – organisers say they took to the new learning style enthusiastically.

Dr Marloes Schoonheim, a researcher and presenter of a portion of the healthcare course, described the success of the virtual experience.

“The audience doesn’t just hear me speak, but is able to walk around and virtually touch the presentation. This really helped to make important points clear and indelible,” Dr Schoonheim said.

“For instance, the 1950s and 60s fear that population would outgrow increases in the means of subsistence. By walking between rows of huge “Population Boom” book covers, we were able to convey the alarm these publications induced.

“I found it easier to keep the audience’s attention on an otherwise dull graph, depicting population growth, when we invited them to walk across the graph, hover over it and, literally, experience the data,” she said.

The key organiser of the ongoing effort to teach through virtual reality said it has as lasting an effect as any education experience.

“I still hear from participants who regularly refer to the event and I can see it made a strong impression on them. They remember much of the population control information from the session, thanks to the effective, innovative and fun learning experience Second Life offers,” Dr Schoonheim said.

The following video shows a short section of the course on population growth and control: