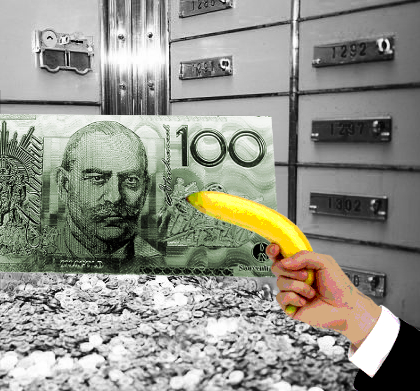 This week has seen an odd interplay between the worlds of banking and groceries.

Woolworth’s has been reminded that it is not a bank, while at the same time Coles is looking to become one.

Woolworths will have to stop using the word “banking” in its financial services marketing after it was chastised by the Australian Prudential Regulation Authority (APRA).

Fairfax Media reports say APRA is probing Woolworths, which is pushing aggressively into financial services such as credit cards and insurance, but does not have a banking licence.

APRA fastidiously controls the use of the word ‘bank’, and has launched several legal actions to shut down operations and freeze funds in recent years.

The most prominent example of its word-policing came when receivers took control of close to $5 million, which had been raised to set up an unregistered bank in Mr David Siminton’s self-proclaimed “Principality of Camside”.

Consumer advocates CHOICE called Woolworths’ “careless” and said it was a concerning if sign of the way the Fortune 500 company might handle its foray into financial services.

“We have seen supermarkets moving aggressively into financial products and they need to be careful as they do that," CHOICE director of campaigns and communication Matthew Levey told Fairfax.

But the supermarkets will continue making a break for banking, as Coles considers joining the Financial Services Council.

Having an official seat at the table with Australia’s leading wealth managers would be a coup for Coles, as it pushes into financial services.

Cole has indicated it wants to start issuing personal loans within the next 12 months, following a recent joint venture with global finance giant GE Capital that has seen it issue credit cards and personal finance products.

The Financial Services Council carries plenty of clout, counting 125 companies in charge of a total $2.5 trillion in Australians' savings.

Some insiders say signing up to the Financial Services Council would bring a string og non-financial benefits to Coles, including access to lobbying activities in Canberra and crucial insider information about financial services market and related trends.

“Coles has spoken to the Financial Services Council about potential membership but has not as yet made a decision on applying to join,” a spokesperson said this week.