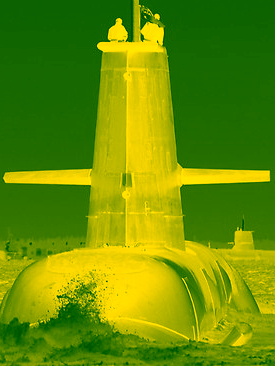 Workers are on strike at Adelaide’s ASC shipbuilding yards.

Over 200 workers have stopped work for 72 hours from Thursday morning, with another 400 workers striking for an hour in support for their colleagues.

The Australian Manufacturing Workers Union (AMWU) claims the Federal Government is forcing ASC workers to sign up to a new enterprise agreement with unrealistic productivity requirements.

“The last fixed cycle document of a submarine was done here in two years, now before that, the last one was done in three and a half years so the productivity gain there is incredible and it's not being recognised by the Federal Government,” AMWU rep Colin Fenney told the ABC.

“Now when you look at our colleagues next door on the AWD [Air Warfare Destroyer] project that has increased by 40 per cent in productivity with these current agreements we have in place.”

“It's just frustration ... and we've asked for the people that are making the decisions in Government to come and sit around the table with us, sit here in front of us so we can get this thing fixed and get it on with,” he said.

“The Government just needs to just step aside and let the workers and the company get on with it.”

The union insists all stop work action is legal, and the next phase of the industrial action will be determined at a meeting on Thursday.