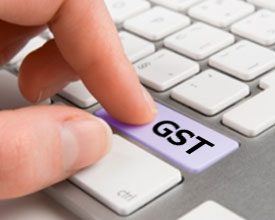 The verdict is down to state governments to decide whether more GST should be collected from online purchases, and minds should be made up by March.

The proposal was one of several topics covered at a meeting of state treasurers with their federal counterpart Joe Hockey on Wednesday. The governments are considering lowering the threshold for GST down from $1000, so that it can be taken from smaller purchases.

State treasurers were presented with a range of options, including lowering the threshold to $500, with further drops phased over time. Most of the state money-holders want a straight drop to $20, as well as requiring it to be collected at the point of sale.

A change in some form has been strongly backed by retail groups, and strongly opposed by consumer groups.

Retail groups say dropping the bar will allow Australian businesses to compete with overseas prices online, but there are doubts over whether the increased income will be higher than the cost to collect it.

New South Wales Treasurer Mike Baird said: “We will ensure that whatever model is considered it is done in the most cost-effective way and at the end of March the treasurers will come back together to make a decision in terms of going forward.”

Queensland Treasurer Tim Nicholls said: “In the first year or two... the costs of collection are higher than the revenue generated, but then the trend gets much more positive the longer you go.”

South Australian Premier and Treasurer Jay Weatherill said there was more work to be done before any of the proposals could be accepted.

“I think the whole meeting generally took the view that there needs to be improved integrity measures which includes the threshold,” he said

“We are not yet at reaching an in principle agreement about that.”

“The Liberal States want to see change around the GST, the Labor States do not,” she said.

“It is because of the fact that the Labor States, SA and Tasmania, the smaller states, are the ones that would be left worse off.”

“What you will end up with is a second class system in Australia where you will have wealthy states and you will have poor states. That is just not part of our Federation.”

Queensland Treasurer Tim Nicholls said: “That wasn't discussed at all.”