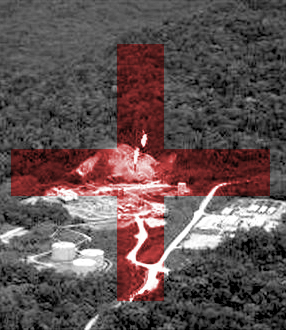 Papua New Guinea's top oil producer is calling on the corporate sector to embrace public-private partnerships to profit through the improvement of local lives.

Mining firm Oil Search has been working with PNG's national Department of Health to combat health issues plaguing the nation, including HIV and AIDS, malaria and TB.

Oil Search controls over 60 per cent of PNG's oil and gas assets, and the PNG Government has just a 0.8 per cent stake in the company.

PNG Prime Minister Peter O'Neill was forced to relinquish the country's 14 per cent stake in Oil Search last March, and failed to secure a loan in an attempt to purchase shares back in May.

"Part of being here is trying to mobilise the corporate sector and look at successful public-private partnerships to help deliver services to the people," the Oil Search MD told reporters at AIDS 2014.

"There is a moral compunction when you see people dying, outside your operations to try and do something about it but there’s also a compelling business model to actually become involved and help the government in delivering these services.

"There’s growing support for these sorts of programs in the corporate sector and certainly from our shareholders,” he said.

Oil Search has its own Health Foundation, which runs clinics that provide services to many thousands of people.

It has programs for HIV treatment, maternal health, ART distribution, malaria and TB, which are conducted in conjunction with the government and NGOs.

Mr Botton said the programs grew from the company’s own internal health services.

He said the profits’ boon must flow back to the community from which the resources came.

“Especially in the remote areas of the country, they expect to see schools, hospitals, roads, power, and if you don't start addressing those issues in the future you're going to have problems with community dislocation and potential security issues,” he said.