Narrabri CSG finds itself in fast-lane 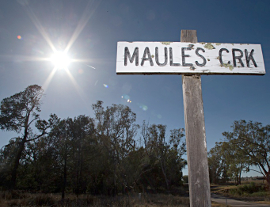 Oil and gas company Santos has signed a Memorandum of Understanding to ensure the assessments for the Narrabri Gas Project will be conducted within set timeframes.

It means the commercial extraction of coal seam gas from the Maules Creek region has been designated a ‘Strategic Energy Project’, which is intended to hurry things along and entice investors.

NSW Energy and Resources Minister Anthony Roberts says the high standard independent environmental assessment will still take place, but he hopes the project will be able to meet a forecast gas shortfall in 2015.

As with all coal seam projects the potential for damage to water resources is the prime concern.

Santos has agreed to monitor water levels and quality, as well as assessing the potential impacts over the course of the project.

Santos vice-president James Baulderstone says despite the fast-track; approval is not automatic, the project has not been fully funded and environmental standards still apply.

“The community must trust the government processes and I think it should have faith in a company such as Santos,” he said.

“The government has very strong regulations and it's important that we combine the two to ensure gas is delivered at the right time.”

Phil Laird, from local action group The Maules Creek Community Council, says the new CSG works are all but assured.

“A lot of the farmers will be gutted and to me this would give all the signals to the market and everyone else that it's a done deal,” he said.

“I don't think the assurances that it's going to go through some sort of planning processes in a timely manner means anything.”

Narrabri businessman and Santos waste contractor, Ron Campbell told the ABC that “support for Santos is huge in the town”.

“These companies have brought in professional businesses employing local people,” he said.

“I couldn't imagine where we'd be if we didn't have Santos.”

Minister for Western NSW, Kevin Humphries, said many local are in favour of the project, and farmers can elect not to work with the mining company, though they have no choice over some aspects.

“The general principle is that farmers have the right to say no,” he said.

“There will be some exceptions to this regarding access provided to companies for exploration and for the building of pipelines across or through farmers land... however, I do know of many farmers being supportive of mining companies and I know of 45 agreements that have been signed by farmers in this region that give mining companies land access rights.”