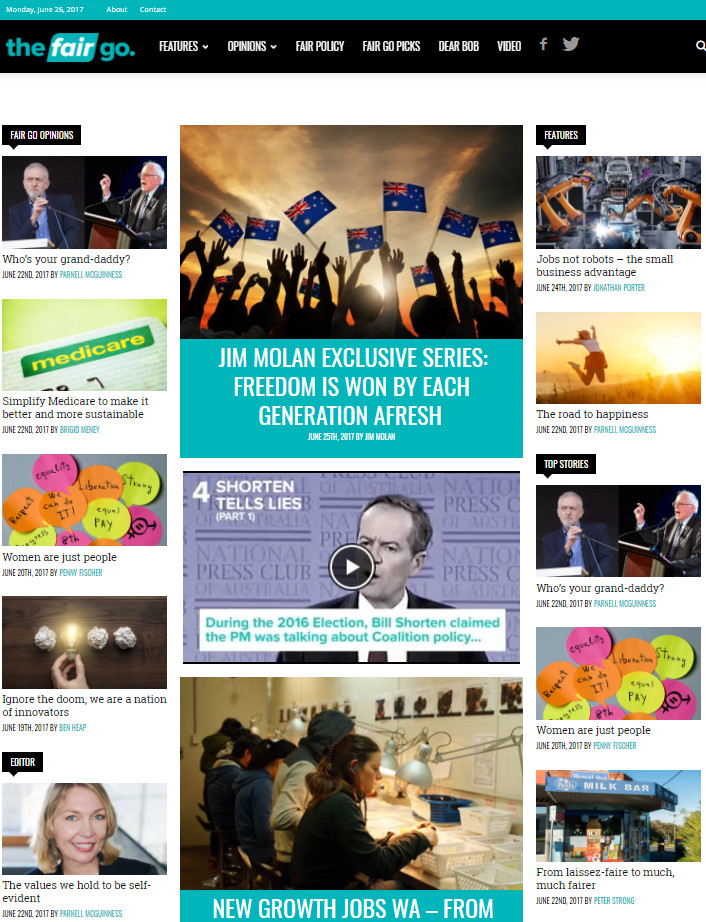 Australia’s Liberal party has launched a new website modelled after rival campaigning organisations such as Getup!.

Liberal party acting director Andrew Bragg launched “The Fair Go” over the weekend as part of his party’s new efforts to modernise or perish.

Mr Bragg says the Liberals are increasingly having to deal with a “cashed up cabal” of opposition.

The Fair Go site includes articles titled “Women are just people”, which is about how females writers often write from the perspective of a woman.

Another piece; “Who’s your grand-daddy?”, questions the level of support for “old white leaders (OWLs)” like Jeremy Corbyn and Bernie Sanders, who the writer describes as “unlikely heroes for a woke generation”.

The site’s third most popular article is titled “From laissez-faire to much, much fairer”, and describes a change in voting patterns by people “sick and tired of government inaction and policy domination by powerful vested interests”.

“It’s time the Australians who make up the small business sector got a genuinely fair go,” the article states.

The Fair Go also features three “words of the week”, which it says takes words that have led the news cycle and dominated debate and explains what they really mean.

The first batch are “needs-based, union and slamming”.

‘Needs-based’ is described as “an important concept which acknowledges that resources are limited, and that efficient, outcome-oriented use of funding is key to good government”.

‘Union’ is defined as “an alliance of individuals who are … liable to hunt down and intimidate your children if you disagree with their definition of needs and wants”.

“He’s either slamming tunes or slamming his party leader. He used to be all for slamming by unions but now he’s against them slamming so he can slam Shorten for not slamming them,” it states.

The articles were produced by editor Parnell McGuiness (a communications consultant who is the managing director of Thought Broker), Penny Fischer (a Camden Liberal councillor and the daughter of Pru Goward), and Brigid Meney, (a policy officer at Cornerstone Group Australia and former Liberal party political adviser).

Mr Bragg told the federal Liberal council: “Publish or perish must be our credo.”

The website “will be a publication which reaches beyond the existing cohort of fellow travellers to speak to undecided and swing voters”, he said.

“It is designed to support the Coalition’s overarching narrative into social platforms and arm supporters with bottom up perspectives on public policy issues.”