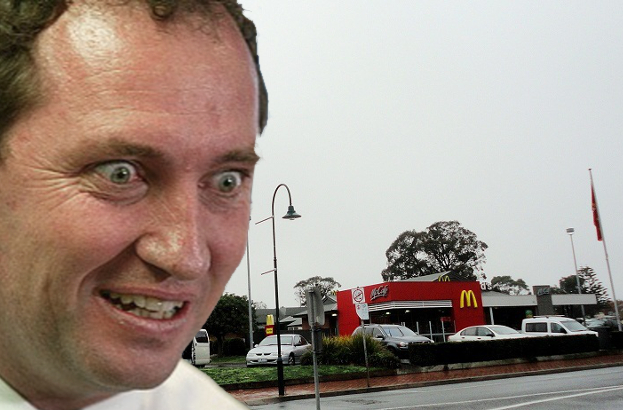 The national pesticides authority is currently operating out of a rural fast food restaurant.

Barnaby Joyce’s attempt to move an entire government agency into his own backyard is becoming increasingly difficult and expensive.

Canberra-based public servants are working from a McDonald's outlet in Armidale because the city they have been forced to relocate to does not have the amenities.

Australian Pesticides and Veterinary Medicines Authority (APVMA) chief executive Kareena Arthy  told a recent Senate Estimates that she and her colleagues were forced to use the restaurant's free Wi-Fi because they have no base in Armidale.

She also said it had been extremely difficult to convince more public servants to move from Canberra to northern NSW.

Workers were offered pay rises and free flights back to Canberra, but even so the APVMA now has to recruit regulatory scientists from overseas.

The relocation of the pesticides regulator is considered by many to be an extraordinarily expensive piece of pork-barrelling by Agriculture Minister Barnaby Joyce, whose electorate contains the city of Armidale.

While $26 million was budgeted for the move, it appears likely that cost will rise because an entirely new office block may have to be built in Armidale to accommodate the agency.

APVMA staff have been offered pay increases of 5 per cent per year and 12 free flights back to Canberra if they move to Mr Joyce's electorate, but Ms Arthy says that is not enough.

She told Senate Estimates that 20 of the APVMA's 100 regulatory scientists were among 48 employees to have quit so far.

“It's proving challenging,” the chief executive told the senators.

“We're not having a lot of success getting people to want to go to Armidale.

“People have left because they don't want the uncertainty.

“They either don't want to move to Armidale and they have decided to look for something more permanent now, regardless of the incentives that we're offering.

“Quite a lot of the people who have left have got young families and they want to make sure that they are able to keep their families in Canberra.

She said the 50 to 60 staff that remain in Canberra will work from home, after Mr Joyce banned them from having an office or any other facility where they could gather in the city.

Ms Arthy said capability gaps were already opening up in the APVMA's assessments of residues, pesticides, the environment and public health.

But despite the eviction, Ms Arthy said morale was “surprisingly good”.