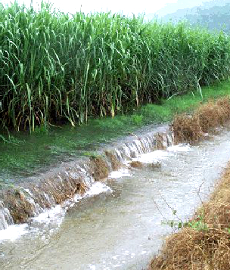 A surprising allegiance has continued between environmentalists, the Federal Government and Coca-Cola, which is aimed at reducing cane farm chemical run-off into the Great Barrier Reef.

One hundred and twenty experts, locals and other delegates have come together this week for the 5th Project Catalyst Forum. Project Catalyst is a program which helps local cane farmer reduce the amount of toxic chemical waste flowing into Reef catchment areas.

The Project has enjoyed more than $2.7 million in funding from the Coca-Cola Foundation, and a new deal has been signed to secure more money for the future.

As one of the world’s most prominent purveyors of sugar, Coca-Cola has a strong interest in making sure the industry stays strong.

“From Coca-Cola's point of view, it needs farms that can have a social licence to operate and ongoing producers to be able to supply them with those sustainable food products,” says the CEO of natural resource management body Reef Catchments, the key group for creating and running the program.

“There's a concern from them that if we continue down the path we've been on, and we don't innovate, that we may not be able to sustainably produce sugar in this case,” Reef Catchments CEO Rob Cocco said.

Over seventy sugar cane farmers from around North Queensland have joined the scheme, which Proserpine farm Lou Raiteri told the ABC has had measurable benefits for all.

“It's allowed me to do the things I'd like to do and try years ahead, because I don't have to fund the complete amount. We are still the major supplier of funds but we've had that helping hand,” he said

“We've done control traffic with the GPS and shielded sprays, so our herbicides are applied more efficiently.

“I'm now in the process of zonal tillage, which allows the centres of the rows to not be worked to any degree and helps erosion and soil health.

Mr Raiteri says the program should continue, to boost its benefits so far.

“If there's a group out there that are leading by example, it does flow through the rest of the industry,” he said

“It will take time, but at least it's there and we're cautious of a sensitive area and we're leading by example.”