Coal and corruption comes back on Obeids 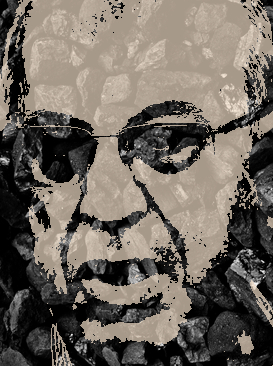 The Tax Office has walloped the Obeid family with a $9 million bill after audits of tax affairs and family trusts.

Documents filed by the Tax Commissioner in court show that corrupt former Labor kingpin Eddie Obeid and more than 30 members of his family have been drawn into a dispute over unpaid tax and penalties over half a decade.

The charge have been levelled against family matriarch Judith, most of the Obeid children and dozens of grandchildren.

The Tax Office has been picking through Mr Obeid’s complex web of family trusts and companies since early last year, according to Federal Court documents, but it has covered only the five years from July 2007 to June 2012.

Still, for those years alone, the ATO has sent bills for unpaid tax and penalties totalling $8.6 million to 11 members of the family and a corporate trustee.

The investigations have centred primarily on the nature of the Obeid family’s slice of a $30 million coal deal, which is itself the subject of a corruption inquiry, combined with a small matter involving a separate mining venture.

The Obeids used this for a mining joint venture with Cascade Coal, a private company which later agreed to pay the family $60 million to removes them from the venture.

$30 million had been given to the family since funds started flowing in 2010.

Now, the dispute between the Obeids and the Tax Commissioner is over the nature of the $30 million, and whether it was ordinary income – therefore taxed at the full tax rate – or was on capital account.

The Obeids have argued, according to court documents, that the coal money is not “ordinary income”, and should hence entitle them to a 50 per cent discount on their tax bill.

Reports say they also claim now liability for penalties over any shortfall on the amount of tax paid “as there was no statement made to the [Tax Office] which was false or misleading in a material particular”.

The Sydney Morning Herald created the following graphic to display from whom the ATO wants to reclaim money. 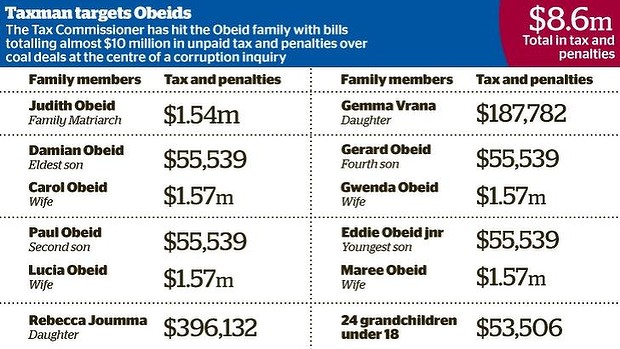