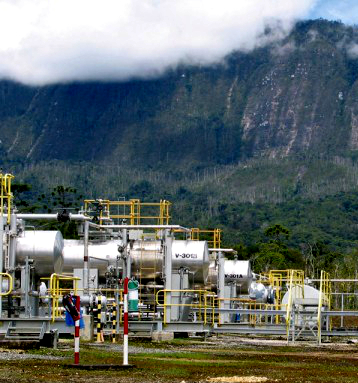 A massive gas project in Papua New Guinea has sent its first shipment to Japan, marking the start of returns on the $20.5 billion LNG endeavour.

PNG LNG has been backed by a consortium of local and international companies.

ExxonMobil has the largest stake at 33.2 per cent, Oil Search Ltd holds 29 per cent, the PNG government has 16.6 per cent, Australian energy firm Santos has a 13.5 per cent stake, Japan's Nippon Oil Corp controls 4.7 per cent and local landowners have secured a 2.8 per cent holding.

The second-highest stakeholder, Oil Search Ltd, is a company comprised of Australian and PNG business figures including NBN Co chairman Dr Ziggy Switkowski, former Executive Vice President of Woodside Petroleum Agu Kantsler, and former Minister of Foreign Affairs and Minister for Finance and Treasury in the PNG Government Bart Philemon. Oil Search holds a 29 per cent stake in the project.

The arrival of the operation phase has been hailed as “an historic moment” by ExxonMobil, for the largest development ever undertaken in the Pacific country.

It includes gas production and processing facilities in the island nation’s Southern Highlands and Western Provinces, liquefaction and storage facilities on the Gulf of Papua and more than 700 kilometres of pipelines.

The project will supply four major customers in Taiwan, Japan and China and is expected to produce an expected 255 billion cubic metres of LNG over its 30-year life.

More than 21,000 people were employed during the peak in construction, as the orchestrators fought to overcome flooding and extremely steep slopes to build infrastructure such as airfields and roads from scratch.

The four-year construction was marred by a variety of issues, including multiple workers’ deaths and disruptions form community outrage.

Not every shares his optimism that the profits will flow to the people of PNG.

“The PNG LNG Project demonstrates to the world what Papua New Guinea is capable of delivering,” he said.

But critics say the project has been environmentally devastating so far, and will only continue to degrade the fragile tropical ecosystem.

The project has inflicted human rights abuses on villagers affected, some groups say.

Others have queried the ability of the PNG government, which ranks poorly in international corruption rankings, to distribute the large revenue wisely.